Get fresh music recommendations delivered to your inbox every Friday.
We've updated our Terms of Use. You can review the changes here.

The Far Out Beat Tape

by Far Out Recordings 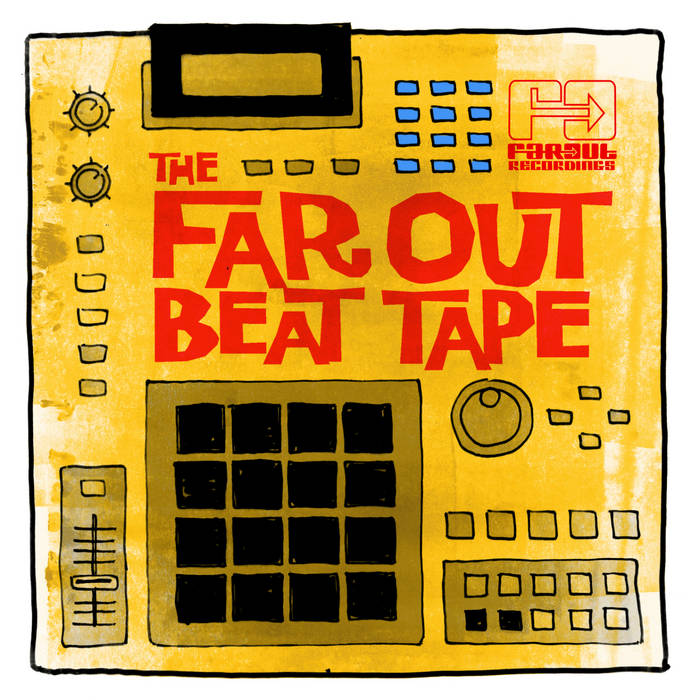 The Far Out Beat Tape brings together some of the finest forays into beat-driven electronic music from the label’s extensive back catalogue. From classics to rarities, of varying tempos and styles, this mixtape eliminates binary genre classification and carves out a place for Brazil on the map of the global beat diaspora.
When celebrated digger, DJ and Brazilian music connoisseur Joe Davis set up Far Out Recordings in 1994, it was an incredibly exciting time for dance music in the UK. House, techno and rave were splintering off into varying directions, jungle was blowing up and the future was wide open. While Far Out may be more widely known for its modern day iterations of MPB, jazz and samba, it has always kept itself firmly on the cutting edge of electronic music as this release amply demonstrates.

Far Out entered the scene with an unparalleled devotion to the music of Brazil’s past and present, but always with a keen eye on the future of UK dance, sensing a lucrative forward path in the marriage of the two which in many ways was an early precursor to the forward thinking blends of rugged dance sounds and organic, groove anchored jazz-funk, fusion and samba that was characteristic of Masters At Work’s Nuyorican Soul project and later the West London based Broken Beat movement.

This compilation serves as both a handy sampler and an overview of a myriad of sounds and styles that Far Out has contributed to the worlds of broken beat, hip-hop and beyond. From the intrepid genre-leaping explorations of pioneering veterans Mark Pritchard, IG Culture and 4Hero to alternative hip-hop legend Peanut Butter Wolf to young up-and-comer Ben Hauke, the full spectrum is represented here.

Simone Seritella’s atmospheric groover ‘Sambalanco’, originally released on Solaria, a subsidiary of Far Out, kicks off proceedings, a rare gem and one that even the label’s most avid followers may be unfamiliar with. On a broken tip, IG Culture’s remix of legendary Azymuth bassist Alex Malheiros’ ‘The Wave’ which marries the worlds of broken beat, hip hop with the sounds of Brazil to stunning effect, while 4hero’s remix of Friends From Rio’s ‘Vera Cruz’ is an exemplary exercise in their uniquely inventive and fearless excursions in grooving funk.

The deeper, more cerebral fare of ‘Lullaby’ and ‘Without You’ come courtesy of Far Out stalwart Troubleman – one of the many guises of Mark Prichard whose overwhelmingly prolific output, spanning the worlds of hip-hop, techno, jungle, funk, dubstep and onward into the experimental dance stratosphere, is close to peerless. Another true dance music original, Theo Parrish, turns in a typically seductive left-field house stepper with his remix of the Far Out Monster Disco Orchestra’s ‘Keep Believing’.

The tape culminates with remixes of two of Brazil’s most celebrated artists, Azymuth and Marcos Valle. The former’s ‘Manha’ receives a subtle reworking from Stones Throw head honcho Peanut Butter Wolf, while Budgie transforms Valle’s ‘1975’, bringing the tracks futuristic synths to the fore to create a moody late-night boogie classic
Together, the selections on this release provides listeners with the diverse flavours from Far Out’s vital contributions to the global network of beats and forward-thinking groove music that the label has been and continues to be an integral part of.

Brazilian music old and new, as well as explorations into the underground of sound. Before Joe Davis and Far Out, the world had only heard the odd record by Milton Nascimento or Jorge Ben. Now Brazilian music is entrenched in the musical vernacular, and it's here to stay. ... more

Bandcamp Daily  your guide to the world of Bandcamp

Oakland producer Mejiwahn chats about his breezy and transportive LP.